Thanks to a change in my son’s basketball schedule, I will be back at the Lie-Nielsen Hand Tool Event hosted by ShackletonThomas in Bridgewater, VT this Saturday. Please note that while I will only be there on Saturday, LN and the rest of the demonstrators will be there on Friday and Saturday.

Situated in an old woolen Mill, Shackleton-Thomas’ sprawls over several floors filled with their pottery and woodworking concern. Aside from being a very talented couple making beautiful objects, Charlie and Miranda are two of the nicest people I’ve met.

Admission to this event is free, and you will have a chance to play with a lot of beautiful tools, as well as talk to other people who share your passion for them. Hope to see a few of you there!

More years ago than I’d dare admit to, I picked up a copy of Wallace Nutting’s Furniture Treasury at an estate sale and began leafing through it. I had never heard of him, but a quick peek at the copious illustrations inside convinced me to happily pay the asking price. A more leisurely leaf-through at home left no doubt of its worth, and I have spent many hours since flipping through the pages, stopping occasionally to enjoy his opinionated writing. I don’t know whether or not I will have time to wander through the Log House Craft Gallery where Nutting’s collection is housed, but you certainly will.

Admission to this event is free, and you will have a chance to play with a lot of beautiful tools, as well as talk to other people who share your passion for them. Hope to see a few of you there!

Bob Van Dyke runs a great woodworking school over in Manchester, CT, and has been hosting an open house event for nearly twenty years. Since Bob has personally guaranteed the weather for the weekend, I will be setting up to demonstrate there for my fifth year.

The Lie-Nielsen Open House kicks off in two weeks, and as a hand tool lover I can’t imagine another place I’d rather be for the weekend. Nearly thirty top tool makers and woodworkers from across the country and abroad will converge on Maine to show off a spectrum of tools and techniques in one of the most picturesque settings I’ve ever visited.

If you’ve never been to an event like this one, it’s a fantastic opportunity to get hands on experience with many tools and meet the makers behind them. I can’t keep track of how many tips and techniques I’ve picked up by talking to demonstrators and makers at events like this. And if this is a return visit for you, I see a few new faces in the demonstrator lineup to look forward to (there is a full schedule and demonstrator list on Lie-Nielsen’s website). 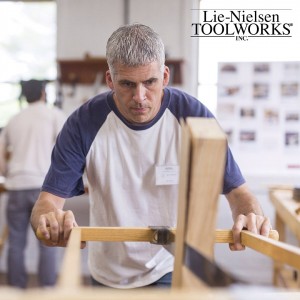 There’s nothing like a little hands-on experience for finding the right tool and learning how to use it.

While I ship to dozens of countries, postage costs can often approach or exceed the purchase cost on many of my items. Australian customers now have another option for buying my saw parts – The Wood Works Book & Tool Co. in Sydney. For now, they carry a few sizes of spines, blades, and bolts, as well as spanners and carbide drill bits. If there is anything else you’d like to see them carry in the future, please let them know.

As I have previously mentioned in this space, I am teaching saw sharpening at a Lie-Nielsen workshop in June. As part of my preparation for doing so, I have put together a few pages of notes on how I sharpen saws. While it’s not a comprehensive guide, I do think there is some good information in there, so am posting it here as a reference for those who are not able to attend. While I still harbor hopes of putting together a more complete and detailed tome on the topic when I have more free time, this must suffice for now.

There are still spots left in June’s saw sharpening class at Lie-Nielsen. If you’ve been thinking of attending, now is the time to register!

Over the course of two days, we will cover the basics of saw tooth geometry before moving on to practice filing both rip and crosscut teeth. The cost for the two day workshop is $275.

Registration and further details are available on the Lie-Nielsen website. If you have any questions, please contact either myself or Lie-Nielsen.

When I built my first rebate-saw plane, I had no intention of making and selling the hardware kits, but was merely trying to work out an easy to use locking and adjusting mechanism that was simple to make in my shop. After taking it to several shows and fielding multiple requests to sell the fence hardware, I made a few kits. They sold quickly, and more requests came in. Unprepared for the level of demand, I looked to farm out several parts to an outside shop. I spent many months of spare time tracking down promising leads which ultimately led nowhere.

To continue making these myself, I needed to upgrade my equipment. Til now, I’ve gotten by with a 9″ South Bend, which is great for many things; rapid production of hundreds of parts is not its strength. CNC was one option, but cost and shop limitations (short on space and incoming power) blocked that route. With the state of the art option closed, I looked back into our manufacturing history for other solutions, and quickly settled on a 1940’s era Hardinge turret lathe.

These lathes are perfectly suited for what I need out of them. They excel at moderate production runs of smallish parts, have a small footprint, and are easily adapted to single phase power with a VFD. They’re also relatively inexpensive (although tooling adds up very quickly) and pretty easy to learn.

Late last year, I found one on eBay, and made the trip to Ohio to pick it up. I spent five or six months rewiring it and buying tooling and accessories while reading everything I could find about the machine and running it. 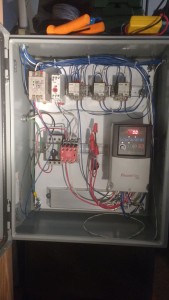 The VFD box, mounted on the left side of the lathe. Drawing up the wiring diagram for this took a while, but was worth the time when everything worked as I wanted. 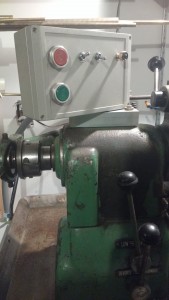 The control panel for the lathe: stop and start buttons, forward/reverse switch, jog/run switch, and the speed control knob.

Last week, it was finally ready to start making the first parts. This part will eventually become the cotter lock, the part that locks the fence on the arms (this is only the first of three steps in making it). 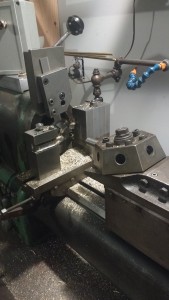 The setup for making the cotter locks. 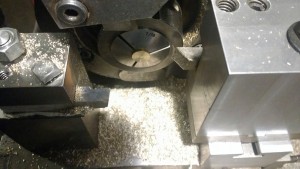 Closeup of the cotter lock setup. 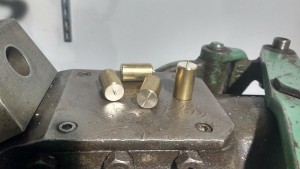 The first parts to come off of the Hardinge lathe, cotter locks. There are still a couple more steps to go before they’re done.

There is still a lot of work to do, and much learning ahead, but this is the first step in catching up with backorders for these kits. Watch here for further progress…

Last year’s class was so much fun that I was delighted to be invited back to teach saw sharpening again this year at Lie-Nielsen’s beautiful headquarters in Warren, ME. If you’ve ever wanted to sharpen your own saws, I can’t think of a better way to start learning. Lie-Nielsen has a well-deserved reputation for being first class hosts, and this is sure to be no exception. 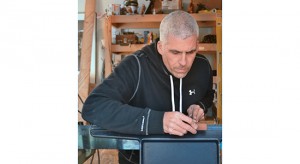 Over the course of two days, I will cover the basics of saw tooth geometry before moving on to practice filing both rip and crosscut teeth. The cost for the two day workshop is $275.

Registration and further details are available on the Lie-Nielsen website. If you have any questions, please contact either myself or Lie-Nielsen.

2017 has been an interesting year here. A significant uptick in orders, along with several family matters, has had me scrambling to keep up with orders. To all of you who patiently waited for me to ship your order, I send a hearty and well-deserved thanks.

Looking at my current order backlog, any order placed after tomorrow (November 8th) that includes saw parts may not ship out until after Christmas. Orders comprised solely of drill bits, saw files, and books or DVDs will still ship within several days.

I apologize for the short notice; if this leaves you in a bind as you shop for Christmas, send me a nice email and I will do what I can to expedite your order.