I spent a few hours this weekend cutting up a small cherry tree that came down in one of this winter’s ice storms. The sumptuous spring weather, the screams of the chainsaw (I do like most any kind of saw, so long as it is sharp), and the exhilirating scents of fresh sawdust and two-stroke exhaust conspired to stimulate all of the senses and push all cares to the side.

While the joy of being outside was reward enough for the labor, the wood haul made it even better. While the main pursuit was to salvage a blank large enough to make a dough bowl, I ended up with enough quartersawn lumber for at least a dozen saw handles, as well as some turning stock. But the most intriguing piece turned out to be a slab I cut from the crotch of the tree.

I haven’t had much luck cutting crotch wood in the past, but decided to give this one a try; after all, the only cost was my time and some small amount of gas. Having seen a few walnut crotches cut, I have learned that if there is any figure to be had, it is strongest and most interesting when cut along the plane that all three of the piths run in. If you center a cut on the piths, you will end up with bookmatched slabs. The figure also fades away very quickly as you move away from this plane. Usually these two slabs will be the only ones with desirable figure, although an exceptional crotch may give another slab on either side (the slabs I have cut are typically sawn at 5/4).

Milling freehand with a chainsaw is not the most accurate method of sawing (not to mention the kerf it takes), so I roughed out a slab about three inches thick, centered on the piths. The figure on the cut surfaces was obscured by the roughness, but didn’t seem particularly inspiring. Since it was free, I threw it in the trunk with the rest of the lumber anyway, and went home. 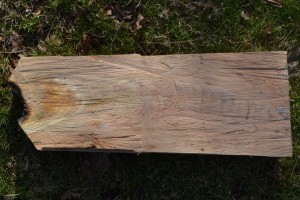 The slab straight off of the chainsaw. In this picture, the base of the tree was to right, and the rounded notch on the left was where the tree forked.

Although I intended to do nothing more with it that day, it sat there in my shop calling out plaintively to me. By now I was shirking shop-cleaning duty, so decided to soothe my conscience by actually doing some work. I set into the slab with my trusty Disston 196 docking saw, a 30 inch beast that was refiled to a rip profile years ago, and has served admirably for resawing since then.

Opening a piece of wood like this is always a bit breathtaking. Rather, I should say that resawing by hand is breathtaking; waiting for the first glimpse of the newly cleaved surface is more accurately described as nerve-wracking. Pockets of bark, rot, or cracks can turn a half hour of handsawing into pointless exercise. But sometimes you get lucky and the wood turns out to be special. Today I was lucky. 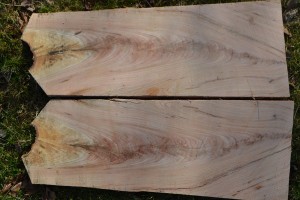 The first glimpse of some very nice figured crotch.

A close-up shot of the figure.

The docking saw I use for a lot of my resawing.

What remains of the slabs after trimming off any visible cracks and defects.

After trimming off all of the visible cracks, I coated the end grain and both sides of the slabs with AnchorSeal, a wax-based emulsion that slows down moisture loss. In my limited experience, cutting the wood into a narrow strip and slowing down moisture loss is the most reliable way of avoiding degradation of crotch wood. If all goes well, these slabs will yield a half dozen beautiful handles in a year or two.

This entry was posted in Wood. Bookmark the permalink.