A pair of saws with Thuya burl handles

When a customer first contacted me about making a pair of saws with Thuya burl for their handles, I pled total ignorance of the wood. After a brief discussion and a bit of research, I agreed to try it out. Not that it was a hard decision; I like to work new woods, and the figure of the Thuya burl was incredible.

When I received the Thuya, I was so captivated by the hundreds of little eyes that I did not remark upon the resinous nature of the wood. Indeed, I was chiefly concerned that the burl would tear and chip when going through my planer. That concern was quickly forgotten when smoke began billowing out of the planer, accompanied by the wonderful and pungent scent of cedar. Apparently, the 4,000 rpm cutterhead produced sufficient heat to release the volatile oils I had earlier overlooked in the wood. The Thuya burl came out the other side with no tearout, so all ended well.

The rest of the build was fairly uneventful, although slow at times. The oily wood had a bad tendency to clog my rasps, files, and sandpaper. Every dozen strokes was followed by a break to brush and clear the teeth (if anyone has a better strategy for dealing with clogging problems like this, please do share it here).

The finish on these handles is a coat of shellac followed by buffing with carnauba wax. Given the very oily nature of this wood, I don’t think there are a lot of other options for finishing. 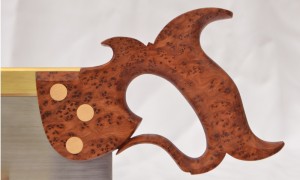 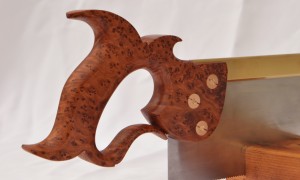 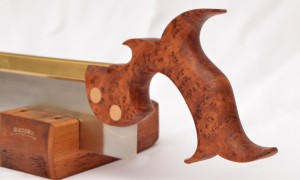 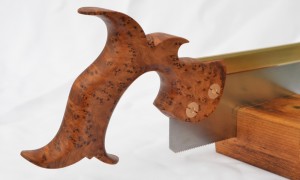 This entry was posted in Completed saws - gratuitous pictures. Bookmark the permalink.

6 Responses to A pair of saws with Thuya burl handles