Catching up on walnut crotch handles

For all of you who have saws with walnut crotch handles on order, this should be welcome news. After a lot of sawmill tours, phone calls, and online searches, I finally have enough walnut crotch to make a sizable dent in the backorders.

Having finally caught up with most of the aftermath of WIA, I spread out my growing stash of wood to cut out some handle blanks. While I enjoy this first glimpse of what is to come, there is some trepidation. This wood comes dearly, and due to the nature of the grain, is difficult to dry without cracking and checking. While the wood may be sound on the surface, I have lost a few blanks to internal cracks and hidden bark pockets.

When planning my cuts, I try to maximize and balance yield, figure, and strength. I usually end up cutting a six inch wide strip (the width of my planer) that captures most of the figure in the crotch. Even on a large slab, the best figure may only yield two or three handles; a slab that yields four blanks is exceptional. 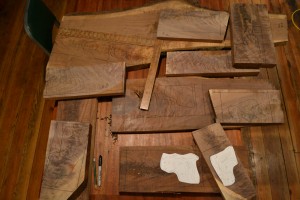 I never tire of seeing the beautiful colors and patterns in this wood.

In addition to the wood shown in the picture above, I have several larger slabs to cut. I often wonder what the sawyers think of me buying a large slab, only to cut it into small pieces. I do have an occasional twinge of guilt over cutting into such pieces, but it goes away when I remember that it will end up in the hands of those who will most appreciate it.

This entry was posted in Saw making, Wood. Bookmark the permalink.