Earlier this year, a nice ash tree came down on a nearby back road. The butt end is a solid 24″ across, and there is about 20 feet to the first fork. While I would love to cut the butt up for lumber, it does not lay in a good position for doing so. The first crotch, on the other hand, was easy to get to. So, even though the wood larder is brimming, I grabbed an 18″ section containing the crotch.

Now, I have not cut an ash crotch before, and could find no online pictures of one, so was not sure what to expect. But the wood looked sound, and the bark pattern looked promising, so I had some hope. After trimming the branches and cutting back some of the main stem, I opened it up and found some nice figure. Not as showy as some of the walnut and cherry I have cut, but still very attractive. The wood is very solid, with no visible voids or cracks, and I have high expectations of it surviving the drying process.

I like to trim crotch slabs back as much as possible before drying them to lessen the chance of cracks appearing as the wood dries, pulling the crotch apart. It was not until I stepped back to take the picture below that I noticed the shape I had cut the slabs into – just in time for Halloween. 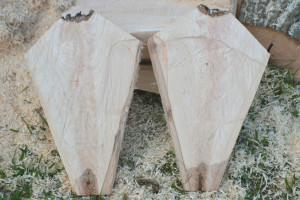 Ash coffins. The rough chainsaw cuts obscure much of the figure.

I’m not sure what this wood will end up in. I’d like to try a saw handle or two out of it, but part of me says that the grain is too coarse for that. Perhaps door panels for a Krenovian cabinet would be a better use. Or maybe I will think of something else in the year or two it will take to dry.

This entry was posted in Uncategorized. Bookmark the permalink.