For the last few months, I’ve been working on and experimenting with frame saws. Not my Roubo frame saws, but the European style that was used by Tage Frid. Finally, and after many delays, the hardware and blades for these Danish frame saws are now ready for ordering. 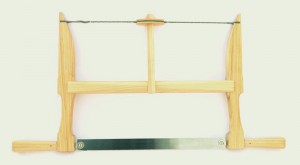 Frame saw hardware:  This hardware is basic, but well-made from stainless steel for reliable performance and durability. PDF plans for the saw are freely available. 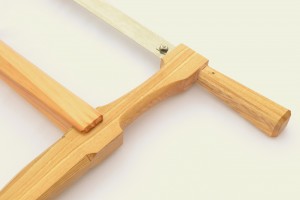 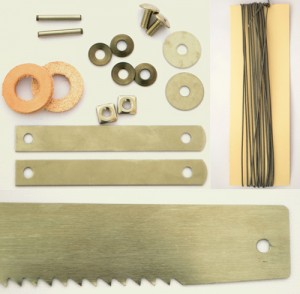 Frame saw blades: For far too long, woodworkers have had to choose between machine-sharpened and set Western style blades and those with Japanese teeth that cannot be resharpened. My sharpened blades fill the empty niche between those two. Made from premium 1095 spring steel, they cut as fast and cleanly as Japanese teeth, but are easily resharpened.  Ready to cut out of the box, although like any other frame saw blade, tracking is often improved by dressing the side of the teeth once the saw is fitted to the frame. Blades are also available unsharpened for those who prefer to sharpen and set their own teeth.

For now, I am making two different blades: a 16″, 9 ppi and a 24″, 6 ppi blade. Both are filed rip. If there is demand for other sizes and configurations, I will expand the range.

Please not that any blades that are ordered now will not ship until the New Year.

DVDs: I’ve added a new DVD section, with three titles for the time being. The first is Build Your Own Classic Frame Saws, a DVD I made this summer with Popular Woodworking that covers the construction and use of the Roubo and Danish frame saws.

The second and third DVDs are Super-Tune Your Backsaw and Build a Custom Backsaw, both by Matt Cianci.

This entry was posted in Announcements. Bookmark the permalink.

One Response to New product additions