I have made blades for Roubo frame saws* for over a year, and to my mild surprise, they have proven to be a popular item. A surprise, but a pleasant one to be sure, as it is heartening to know there are others who share an interest in this aspect of the craft.

I have ripped many feet of wood with handsaws, and my Roubo frame saw puts them all to shame. It will not make resawing an easy task, but does make it much less daunting. To make it easier for others to make their own Roubo frame saws, I now sell a hardware kit to complement my blades. This hardware kit is robust, easy to work with, and fairly faithful to Roubo’s illustration.

Several weeks ago, I took my 48″ Roubo frame saw to the Lie-Nielsen Open House, where it sat next to my bench for passersby to see and try. Those seeing it for the first time in real life were inevitably struck by its imposing size and distinctive style. Many stopped to ask questions about it, and more than a few ventured a test cut or two. Judging from the smiles on the faces of those who tried it, the experience was not an altogether unpleasant one.

The Roubo frame saw hardware is available as part of a complete kit that includes a blade ($113-$182, depending on blade selected, until September 1, $119-$188 afterwards), or as a hardware only kit ($57 until September 1, $63 afterwards). Except for wood, the complete kit includes everything needed to build the Roubo frame saw; you will need to supply both the wood and the blade for the hardware only kit.

Building the wood frame is an easy woodworking project that provides ample opportunity for customization and embellishment.  For those who want a starting point in making this saw, a scaled pattern of the arms is available. 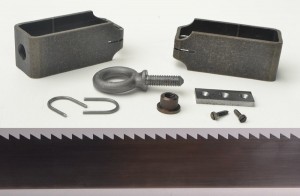 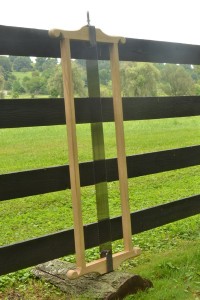 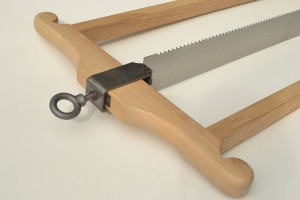 *The blades I make are slightly different from those described by Roubo:

The blade of the saw, as I just said, is 4 thumbs [inches] size at least, tapering barely toward the back [away from the teeth]. We do not put a set on these sorts of saws, because that would eat up the wood excessively with an unnecessarily wide kerf, and one takes great care that the teeth be perfectly straight on the horizontal, and that their teeth be also perfectly equal in height, so that they grab all equally, and that they do not chatter… (To Make as Perfectly as Possible: Roubo on Marquetry, as translated in the Lost Art Press edition)

The saw described by Roubo was used to cut veneer. Because veneer is thin, little clearance in the kerf is needed (the veneer flexes easily, so there is little friction and no danger of the blade being pinched in the kerf). The taper in the blade would have provided ample clearance.

Most of the blades I sell are used more for resawing large boards into smaller planks. Because of this, there is significant friction and the possibility of the kerf closing in on the blade. To counter this, I add set to the blades.

Even with the set, it can be used to cut veneer. You will lose a little bit more to the kerf, and the surface finish will not be as smooth, but it is very doable.

This entry was posted in Announcements, Saw design, Saw making. Bookmark the permalink.