Saw build along – Handle, Part I

This is the first entry in a nineteen part series that covers the construction of one of my saws from start to finish. For links to the other entries, please see the full chronological index.  -Ed.

The handle is the most dominant visual part of the saw, and wood selection is critical in making it work.

Stock selection begins at the lumberyard, or in the best scenario, at the log.  I have developed a good working relationship with a local sawyer, who calls when he comes across a promising log.

I work primarily in five woods:  apple, beech (American and European), cherry, and walnut.  There are a few differences between the woods, so I will quickly go over what I look for in each of the woods.

Apple:  Large logs are few and far between, so anything over a foot in diameter is fair game.  Unlike most other woods, I am not interested in using only quartersawn wood.  Quartersawing apple does not reveal a lot of figure or flecking, so the lower yield is not worth it.  For this reason, we cut apple logs through-and-through, yielding a mixture of plain, rift, and quartersawn wood.

Usually apple logs are small enough so that every handle will have both light sapwood and darker heartwood, which makes a striking contrast.  It is also common to find small pin knots, bark pockets, and worm holes.  So long as these do not compromise the strength of the handle, I see these as enhancing the character of the wood, and not as something to be worked around. 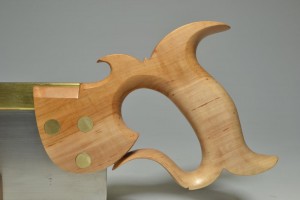 Apple, showing the contrast between the lighter sapwood and darker heartwood.

Beech:  European and American beech are similar in that both reveal their best figure when they are dead quartersawn.  Fortunately, imported European beech is usually cut in this manner.  American beech, on the other hand, is not highly sought after and can be hard to find in any form, let alone quartersawn.  When we saw a beech log, every cut is made to maximize the yield of quartersawn lumber.  In beech, it is very important that the wood be truly quartersawn, for the figure drops off very quickly with just a few degrees of variation from quartersawn.  The yield is lower in this method, but the resulting figure is very striking and worth the trouble.

I use both the sapwood and heartwood, and often in the same handle.  The color difference is not stark, and diminishes over time as the wood mellows. 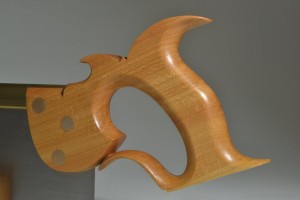 Quartersawn American beech, one of the truly beautiful (and underrated) hardwoods of North America.

Cherry:  Cherry is similar to beech in that the quartersawn form reveals a striking ray or flecking pattern.  Unlike beech, it is a desirable furniture wood and is widely available.  When working with cherry, I use only the heartwood, as the white sapwood does not fare well when compared to the rich red tones of the heartwood. 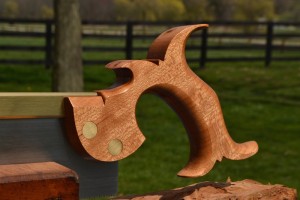 An exceptional piece of quartersawn cherry, sent to me by a customer.

Walnut:  I use two variations of walnut for my handles.  The first is quartersawn.  While there is no stark difference between quartersawn and plainsawn figure, the quartersawn grain looks a little cleaner and is slightly stronger and more stable.

Walnut crotch is one of the most beautiful North American woods.  It is, as its name betrays, cut from the fork of a tree.  The best figure comes when the fork is split so that the sawn faces form a “Y”.  The figure comes from the interaction and intertwining of the grain in the two branches, and ranges from barely noticeable to spectacular.  Not every crotch will have this figure, and those that do have little of it, usually yielding just two or three slabs with this figure. 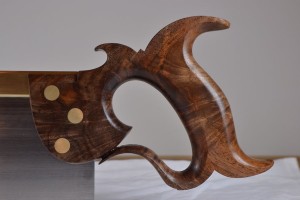 Walnut crotch, with its typical swirls, rays, and variegated grain.

This entry was posted in Saw making. Bookmark the permalink.

7 Responses to Saw build along – Handle, Part I