I have neglected this blog for some time now, but only for the sake of making a good appearance at the 2013 WIA conference. Despite running out of time to prepare fully for it, the show was a rewarding experience for me.

Saw elf No. 1 and I departed for Kentucky early Thursday morning, and arrived there just in time to move our display into the conference center. While unloading, Roy Underhill, whom my daughter had been dying to meet for the last several months, came over to say hi. My daughter, who has a rather outgoing personality, suddenly became tongue-tied and was unable to introduce herself.

Friday was the first day of the Marketplace, and we managed to stay busy. Megan Fitzpatrick stopped by, and was kind enough to take the saw elf under her wing and show her around. Much to her delight, she had another chance to meet Roy, and this time came away with an autographed wood chip from his log hewing demonstration.

In between the busy periods, and after the show was done for the day, I had the pleasure of meeting quite a few toolmakers, which by itself was worth the cost and time expended to attend.

Saturday was busier than Friday, and we were more than ready to break camp by 6:00, even if it was to jump back into the car for the nine hour drive home. Before we left, we were treated to one last surprise when Roy showed up one last time to skip around the parking lot with the saw elf. 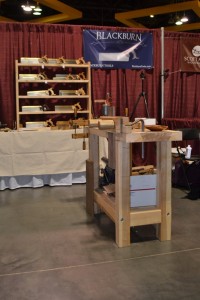 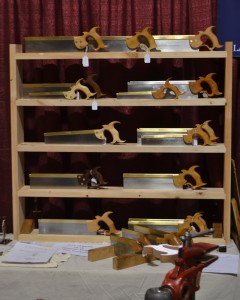 This entry was posted in Shows. Bookmark the permalink.