And now for something completely different…

I always welcome an excuse to try my hand at saws that are outside of my usual patterns, so when a couple of customers requested saws based on late 18th century English saws, I gladly accepted.

The first wanted a saw similar to the carcase saw shown in Smith’s Key.   The defining features of this saw are the heavily canted blade and tapered spine.  While the one shown in the key sports an open handle, the customer wanted a closed handle based on my standard carcase saw (in the London pattern, of course). 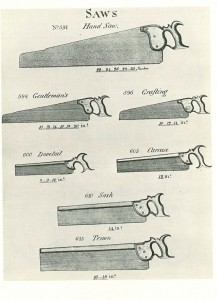 The spine and saw bolts are bronze.  The handle is European beech.  I experimented with several finishes on this one, and went with a water-based varnish that I wiped on.  Oil-based finishes (including Tru-Oil, my standard finish) had too much color, and tended to muddy the wood, obscuring the grain and figure.

This saw is filed as a dedicated crosscut saw.  It cuts wonderfully, with a very different feel than my standard carcase saw.  It is difficult to describe the difference between the two, but I think the combination of the shallower blade depth and tapered spine make the act of cutting a little more intimate.  I cannot say that I prefer one over the other, but I am a firm believer that most of us can and will adapt to the feel of most any decent saw over time. 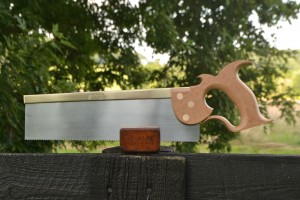 A little different take on the Smith’s Key carcase saw. 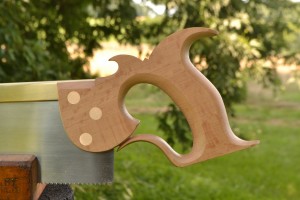 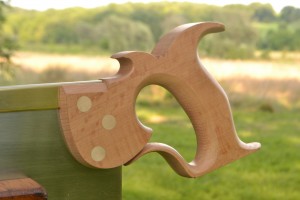 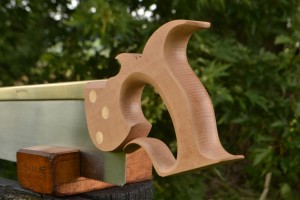 The second saw is a close reproduction of the Kenyon Seaton 19″ tenon saw.  This saw also features a canted blade and a tapered spine.  I shortened the blade to 18″, and milled the slot instead of folding it.  The handle is apple, another departure from the original.

The other details are as close to the original as I could make it without ever having seen the original in person.  My guide was a scan from The Tool Chest of Benjamin Seaton, a book that documents Seaton’s tool chest and its contents (thanks to Dominic Greco for the scan).  While the print in the book is of poor resolution, it captured the spirit of the saw and provided some key dimensions.  While a physical examination of the actual saw would surely reveal some variations it and my saw, I am pleased with how it turned out.

Measured drawing of Seaton’s19 inch tenon saw by Kenyon, from The Tool Chest of Benjamin Seaton.

In use, the saw took a little bit of getting used to.  The handle was a little roomier than I am used to, but  after becoming accustomed to that and the low hang of the handle, any fears of the saw being overly heavy and unwieldy were allayed.  Indeed, given the weight and size of the saw, a more aggressively hung handle would likely make the saw difficult to control. 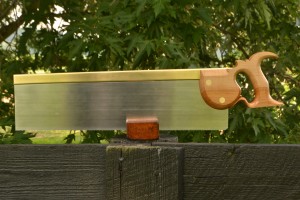 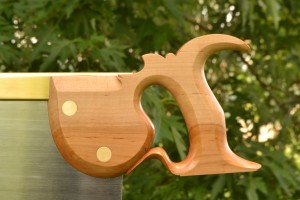 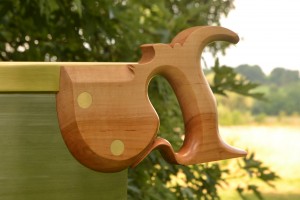 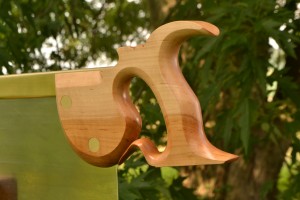 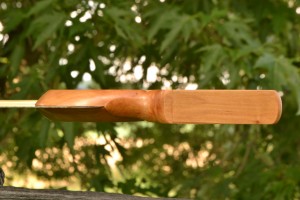 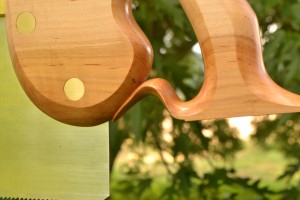 This entry was posted in Completed saws - gratuitous pictures. Bookmark the permalink.

2 Responses to And now for something completely different…