The lamb’s tongue on my saw back

One of the most frequent questions about my saws is why I use a lamb’s tongue on the end of some backs. While I have tried to come up with a credible story that involves swashbuckling pirates on the Spanish Main, the truth is that it arose from an accident. 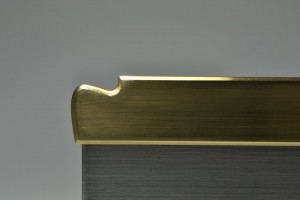 My interpretation of a lamb’s tongue at the end of a back.

The first batch of saws I made were all to have backs with traditionally rounded ends. The detail is classic and pleasing, and the first few turned out just as planned. With the confidence bred by past success, I began to trim another of the backs to length. A sixteenth of an inch into the cut, I noticed a line 1/4″ to the side of my cut. With a sinking heart (and a hearty “Arrr, blow me down!”), I paused to identify it as the cut line I had scribed seconds earlier. Now, as any good mechanick knows, an errant cut invariably falls not on the waste side, but on the portion of the stock which is to be used; this was not to prove the exception.*

Loathe to discard an otherwise fine piece of brass in which I had invested good time and hard-won booty, I mulled over my options. The most sensible of these may have been to finish cutting the back short, then trim the saw blade back by the same amount, but that seemed wasteful. A better option was to find a way to conceal the mistake.

Armed with a meager design ability and vocabulary, I quickly settled on my old standby embellishment, the lamb’s tongue. After a few quick sketches, I had a workable design that hid my error. I was happy with the look, and thought that it helped to balance out and soften the many straight lines on that end of the saw.

To my mild surprise, the detail was well received by customers and friends.  With about 75% of the saws I send out featuring that detail, what began as a coverup has turned into a hallmark of my work.

And aye, thar be the true story.

*I could offer up countless stories attesting to the verity of this rule, but offer up the following anecdote which fully illustrates its insidiousness. I once managed to cut a length of crown molding one inch longer than marked, and laughed at this mildly embarrassing error until discovering the original measurement to be two inches too short. This was, of course, the molding meant for the shortest wall in the room, so the piece was a total loss. -Ed.

This entry was posted in Saw design. Bookmark the permalink.