When I was sent an older Disston backsaw to rehandle, it was requested that I reuse the saw bolts and medallion. While there was nothing wrong with them, they were too short to reach through the new and larger handle. While I could have sunk them below the surface of the handle, such a solution would have looked awkward and amateurish. Rejection of that option meant the reach of the bolt or nut had to be extended. I chose to extend the bolt.

To extend the bolt, I used a short length of 1/4″ brass rod. I began by drilling a 1/8″ hole in one end, to a depth of about 3/8″. I then trued that end up so that the face was perpendicular to the sides. Finally, I filed a couple of grooves into the face to give the solder an easy entry point into the joint. 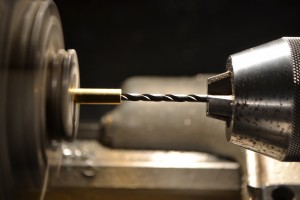 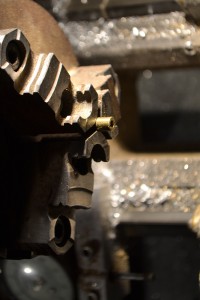 Next, I chucked the medallion in the lathe, then took light cuts to remove the existing threads. Because I did not want to damage the head of the bolt, I did not tighten the chuck as much as I could have or normally would, so limited myself to light cuts. I took multiple passes until I had turned the bolt shank down to 1/8″. 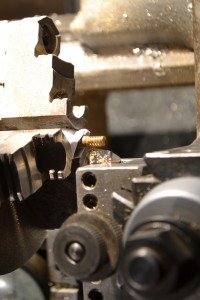 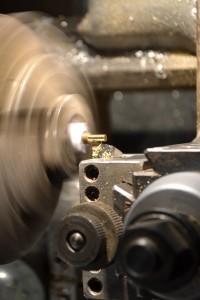 With the bolt still in the lathe, I slipped the extension over the reduced shank on the bolt, then used a scrap of metal rod mounted in the tailstock to hold it in place while I joined them with silver-bearing solder. 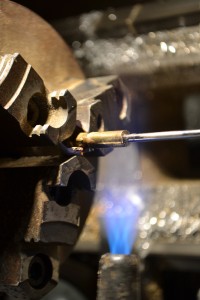 Soldering the extension onto the bolt.

With the extension in place, I turned to threading the new shank. Like Stanley, Disston used 12-20 threads, a size that has now fallen out of favor. 12-20 threads have a major diameter of 0.212 inches, so I first turned the extension down to that dimension in several light passes. 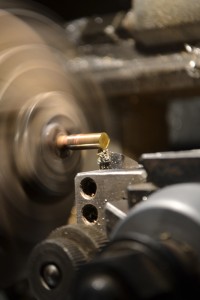 Turning bolt extension down to size. 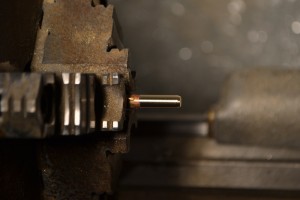 Bolt extension turned to final diameter and ready for threading.

Because 12-20 threads are rarely used nowadays, the taps and dies needed to cut them are not commonly found items. While I do not own such a die, I do have a die head that can cut 12-20 threads in a pinch. Using 1/4″-20 chasers, I can adjust the die head to cut a 12-20 thread. I cut the threads in multiple light passes to prevent the cutting torque from spinning the bolt in the chuck. The video below shows a couple of those passes (the adjustment shown between threading passes reduces the diameter that the die cuts).

At the smallest setting, there was still a hint of a flat spot on the crest of the threads, so the nut would only thread on one or two turns before binding. With the lathe running, I used a three square needle file to finish off the thread. 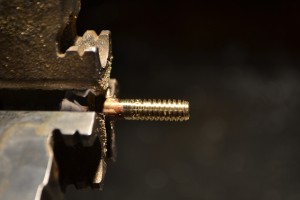 I ran out of adjustment on the die chaser before the threads were entirely cut. 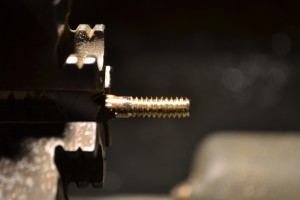 And that’s it. After a little polishing on the lathe, these now look almost as good as new. 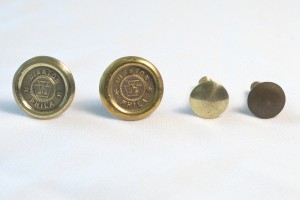 A dab of Autosol on 0000 steel wool took these from grungy to a near mirror polish in under 15 seconds. 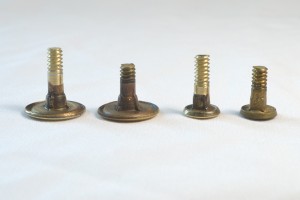 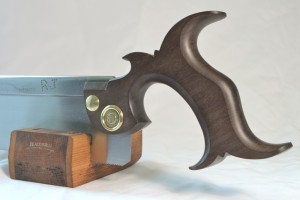 The bolts installed in the new handle. The wood is Brazilian ebony.

This entry was posted in Saw repair. Bookmark the permalink.